WHY WE DON’T USE BEESWAX IN OUR PRODUCTS

Honeybees are in crisis!

Many factors are influencing the decline of bees, including habitat fragmentation, increased use of neonicotinoid pesticides, mono cropping, colony collapse disorder, and climate change.

The dramatic drop in the population of bees has increasingly been of concern because of the important role they play as pollinators.  Without bees, many of the world’s most important crops would fail and directly affect the food supply of humans and countless other species.  A future without bees would be devastating.

Of the 100 crop species that provide 90 percent of the world’s food, over 70 are pollinated by bees.

Colony collapse disorder is a grave concern as colonies of bees are struggling to survive. This is caused by the likes of the varroa mite, parasites and pesticides used by commercial croppers which can weaken the bees’ immune system leaving them vulnerable to disease.

Why do bees make honey and beeswax?

Honey is produced by bees for bees. It is their energy source, and without it they will starve.

Honey bees collect nectar from flowers. They will visit up to 1500 flowers in order to collect enough nectar to fill their ‘honey stomachs’. When they return to their hive the nectar is drawn out, broken down by the ‘house bees’ and injected into the combs of the hive. Once the water from the nectar has evaporated, the sticky substance (honey) is then capped with beeswax to keep it safe until the bees need it.  Bees need the honey for food in the colder months or in the event of drought.

During this process, bees collect pollen on the hairs of their bodies, distributing it from plant to plant which enables the growth of all plant life.

This is why bees are so essential to our ecosystem.

Beeswax is touted as a natural alternative to paraffin and mineral based waxes, but the bees need their beeswax more than we do.

Beeswax is produced by the worker bees, who have to fly the equivalent of six times around the earth to gather enough pollen to create a single pound of beeswax.

When honey bees are around 2 weeks old, they develop special wax-producing glands in their abdomen. These glands converts sugar from the honey into wax. It takes approximately 2.5kg of honey to produce .5kg of wax

The wax is used by the bees to build the combs, which house their young and store their honey.

When honey is harvested, the wax is collected at the same time.

Only a small amount of beeswax is produced from a single honey harvest, so most of the beeswax used commercially for cosmetics and candle making comes from large commercial beekeepers.

Each bee produces approximately .5g of honey in its lifetime (one twelfth of a teaspoon) 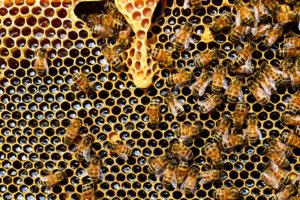 Honey provides essential nutrients for the bees and their well-being can be sacrificed when it is harvested by us.

The honey industry is profit-driven where the welfare of bees is of lesser importance than monetary gain.

Commercial beekeepers aim to harvest the maximum amount of honey, and because honey bees will fill the space they live in, most large-scale apiarys give the bees larger chambers for maximum production.  They then take too much of the honey and replace it with man-made sugar water which lacks the essential micro-nutrients of honey and leads to malnourished bees that are more susceptible to disease and pests.

As these selective honey bees are mass-bred to increase productivity, this affects the populations of other competing nectar-foraging insects, including other species of bees, and the narrowing of the gene pool increases the susceptibility to disease and large-scale die-off. Diseases are also caused by importing different species of bees for use in commercial hives, which in turn can spread to other pollinators.

What can we do?

With the high demand for beeswax from cosmetic, skincare and candle making industries it is important to make the right choices.  Look for products that are beeswax-free, plant a bee friendly garden, avoid or eliminate pesticides and buy locally grown fruits and veg.  If you are buying honey, buy local raw honey and support your local beekeeper.

At Orania we use candelilla wax, sunflower wax and floral waxes in place of beeswax.